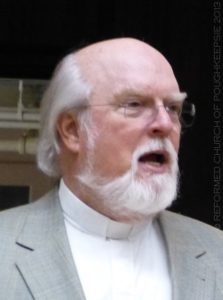 E. Robert Geehan, who will retire as Pastor of our congregation at the end of June 2014, became the pastor of the Reformed Church of Poughkeepsie in the summer of 1998. Prior to that, he was Associate Professor of History, teaching world history, ancient history and history of religions at the United States Military Academy, West Point (1985-1998) and a Protestant cadet chaplain at the Academy (1984-1993).

Upon reaching the retirement age for ministers as set by the Reformed Church of America, the Consistory extended Pastor Bob a one-year contract to continue as our as Pastor, with the intention of renewing that contract on a yearly basis. In the fall of 2013, Pastor Bob decided to step aside that coming June and enjoy his retirement with his wife, who by that time had also retired from her teaching position. Together they welcomed the birth of their first grandchild in the spring of 2014.

Pastor Bob led his final worship service as our pastor on Sunday, June 29. The following week week, theReverend Dave Hondorp began serving as our interim minister, planning to serve for about one year as the Consistory searches for the Reformed Church of Poughkeepsie’s next pastor.

Bob and his wife Cherrill, who are married over 40 years, have three grown children and, as of the spring of 2014, one grandchild. Mrs. Geehan holds two masters degrees — one in counseling and another in school administration — and taught in the North Rockland Central School District from 1986 until her retirement in 2009. We consider ourselves belssed to have known both Bob and Cherrill and to have been led by their ministry and example since 1998. We wish them both a long, happy and healthy retirement, and we do hope that they drop by from time to time!

◀ Reverend David Hondorp, Interim Pastor 2014 – 1026
Installation of the Reverend Jason Elder as Minister Of The Word ▶