Our Organist and Choirmaster 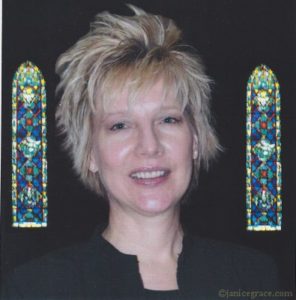 Janice Grace, classical performer and contemporary composer, succeeds George Tilley as organist and choirmaster of the Reformed Church of Poughkeepsie.

Ms. Grace has played classical organ since the age of 10. Throughout junior high school, she studied classical piano and organ with Mr. Charles Boehm, who recognized her emerging abilities. At age 13, Janice became Mr. Boehm’s assistant organist at Trinity Lutheran Church in Hicksville, Long Island, and Janice undertook a schedule of rehearsals and performances that ultimately consumed more than five hours a day. At 15, Ms. Grace auditioned for Westminster Choir College and was accepted.

In her 20’s, the call of the Pop music world was so strong that she walked away from her classical roots and liturgical training. Janice immersed herself in contemporary songwriting, singing, producing and engineering, fulfilling her need to control every aspect of her musical expression. All of her musical releases can be found on Amazon or iTunes.

Ms. Grace has finally found the perfectly balanced musical life: performing classical organ and continuing to write Pop-Rock-Dance music. Janice is a member of the American Guild of Organists, and has served as the organist and choir director at the Reformed Church of Poughkeepsie since the Spring of 2012.